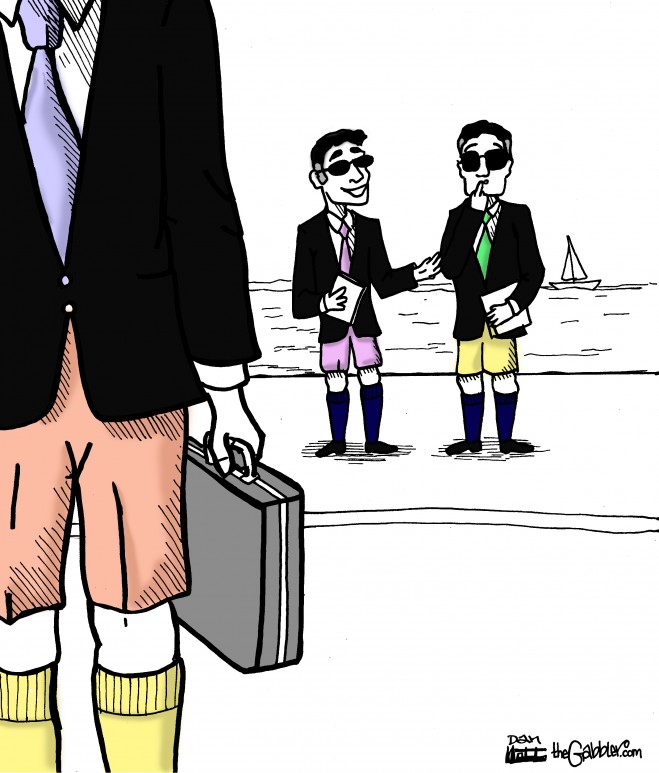 For the past 16 months, The Gabbler’s Jessica Pierce has been living in Bermuda, best known for its pink-sand beaches and treacherous Triangle. On Wednesday, August 28th, she will be boarding her last Newark bound flight from Bermuda’s adorably pink-colored airport and heading back to the United States to make a name for herself in…well, in something. She hasn’t completely made up her mind yet. As a final farewell to the island that she has called her home for almost a year and a half, she has written the following essay concerning the inherent sexiness of the Bermuda shorts business suit, Or the real reason she liked Bermuda so much.

To most Americans, Bermuda shorts are just a trend trotted out by Old Navy every few seasons. Gleefully worn by middle-aged women everywhere, they’ve become the Mom Jean of shorts. But to a lucky few in semi-permanent self-imposed exile in Bermuda, or even to those stepping off a cruise ship for the afternoon, Bermuda shorts are a giddy expression of business savvy, an everyday work outfit that measures manliness by the shade of your pastel.

The only similarity between authentic Bermuda shorts and the Old Navy doppelgangers is the inseam, which falls several inches above the knee. The authentic Bermudian version are linen and come in a variety of colors ranging from a conservative navy blue to a joyful sunshine yellow. The best part of all are what are officially known as “Bermuda hose,” but more generally referred to as knee socks. Yes, knee socks. They come in colors meant to complement the shorts. The bravest of men are seen out at a business lunch in salmon shorts and pale yellow socks, completely unashamed of what would look ridiculous in any other country.

This spiffy ensemble is standard business attire in the hot summer months here. While hundreds of miles to the north, the accountants of New York City are forced to sweat through full suits in the terrible heat, their counterparts in Bermuda skip off to work in their shorts and hose, knees happily displayed to the world.

The American fashion of covering up a man’s legs in a pair of baggy suit pants may get the job done, but it does a great disservice to all straight American women. In Bermuda, a woman can happily walk down the street, casually glancing at a sea of uncovered male knees. Pasty white and knobby, or tan and muscular, they’re right there. The shorts and the hose frame the knees, as a carefully carved frame enclosing a great work of art.

And the calves! The Bermuda hose cling to every curve, emphasizing muscles that you never knew were there. In a few sad cases, they droop, succumbing to gravity on legs still too spindly to support their fine cotton/spandex blend. In the United States, women need to practically undress a man before finding out about the condition of his calves, especially during the long winter months. But in Bermuda they’re right there, clad in salmon pink, during the most important of meetings.

There will be plenty to miss about Bermuda, leaving after a year and a half. The crystal blue of the mid-Atlantic, so perfectly cerulean that it almost breaks your heart to look at it for too long; the thrill of a moped revving its way up past 50 kilometers per hour (that’s more than 30 mph, for you Americans); the joy of touch rugby, a sport that I’m years away from actually mastering, despite the pretty basic and straightforward rules. What I’ll miss more than anything, though, is the curve of a man’s calf. From the bottom of his yellow hose to his perfectly salmon linen shorts, pasty knees lovingly sandwiched between. As the great poets Salt, Peppa, and En Vogue once said “what a man, what a man, what a mighty fine man.”