Preventing Your Untimely Death: a Primer

On June 18th, Michael Hastings, an investigative journalist best known for an explosive expose that lead to the resignation of General Stanley McCrystal in 2010, died in a single-vehicle crash in Los Angeles’ Hancock Park. His 2013 Mercedes Benz appeared to be going full speed before veering off of the road, hitting a palm tree 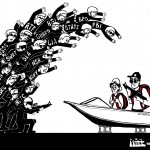 Today, in a press conference held at FBI headquarters, FBI director Robert Mueller announced that the FBI is launching a large-scale investigation into the April 19th series of bird strikes, which affected three separate planes, including one...