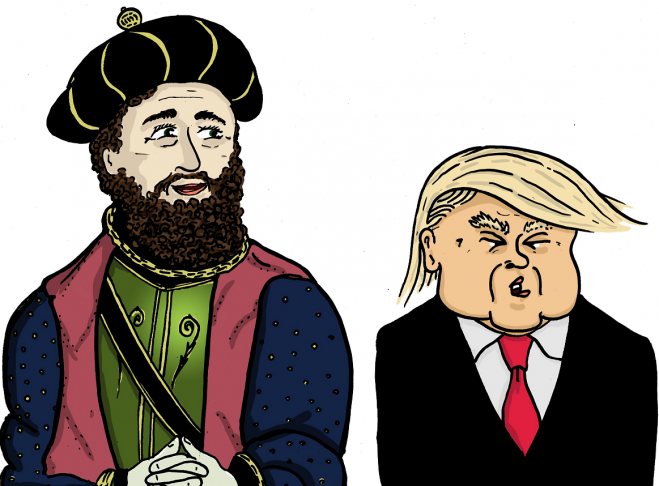 Upon perusing Sapiens: A Brief History of Humankind recently, a Gabbler member came across the idea that the admission of ignorance (the very foundation of the scientific method!) and the subsequent search for answers is what led to modern day science, exploration, technology, and just pretty much all the great things about human intelligence that we take for granted. This idea struck The Gabbler as strange, since the absolute last thing anyone wants to do in 2015, especially on the internet or in politics, is admit that they don’t know everything about anything ever. So to get to the bottom of this difference, we’ve asked a modern-day political candidate, Donald Trump, and renowned explorer Vasco da Gama (who was absolutely unashamed to admit that he had no idea how to get to India via a sea route) to sit down with us.

The Gabbler: First of all, thank you so, so much for being here today! It’s really such an honor to meet someone so important to the history of mankind. I’m just kind of floored to be in the same room with you, to be honest.

Donald Trump: I tend to have that effect on people.

TG: …I was talking to Vasco da Gama, actually. Not that your work on The Apprentice wasn’t illuminating Mr. Trump. I mean, it was no sea route to India, opening Portugal up to trade with India without going through the Mediterranean or the Arabian Peninsula, but Bethenny Frankel sure is making her mark on the Bravo network. All thanks to the start you gave her!

DT: Actually Bethenny was on the Martha Stewart season.

TG: Right. But please, Donald, can I call you Donald? Why don’t you let Vasco speak for a second? Or at least move so I can stare deep into those beautiful brown eyes. Oh what they must have seen!

Vasco da Gama: Why thank you, Senhorita. Your eyes, too, are endless pools of understanding and curiosity.

DT: What does that even mean?! Listen, with all due respect lady, your eyes are putrid pools of liberal brainwashing. Let’s get to the real important topic: making America great again.

TG: Well, actually we’re here to talk about something else: ignorance. Vasco, how do you feel ignorance has helped you in your life?

VdG: Ignorance was the beginning of everything Senhorita. I did not know that there was a traversable sea route to India, so I left my home and travelled far, through treacherous waters, around the Cape of Good Hope, risking my life and the lives of my men to find the answer, to find the one route that would not result in total wreckage. And before now I was ignorant to what true beauty was. But I discovered it as soon as I saw your face.

DT: So you’re telling me that all this schmuck did was find the way to get to India? I can do that. Step one: get on my private jet. Step two: Tell them to take me to India. Done.

TG: Well, yeah, but he was the FIRST to do it. Because he admitted that he didn’t know the answer so he went out and sought it. What was the last time you had to go out in search of answer?

DT: Never. You wanna know why? I was born with the answers. They’re all up here, beneath my full head of hair. Trump see all, hears all, knows all.

TG: But isn’t that kind of the point? If all of human knowledge fits inside of Donald Trump’s brain, aren’t we done moving forward?

DT: Well we better start moving forward, toward the Reagan era, now that Obama’s been moving us backwards toward socialism. Time to make America great again!

VdG: If I may, Senhorita, isn’t the first step to knowing admitting that you do not know? Is life not an endless exploration, a search for the answers to our most profound, and most even most petty, questions? Without questions, what are we, but apes trumpeting our own greatness to the troop?

DT: Did you just call me an ape? With a mug like that, you should look in the mirror before you start throwing stones. Glass houses and all.

TG: And I don’t think someone with hair as disastrous as yours should criticize a man with such a gorgeous, flowing beard, Donald. Anyway, let’s get on to something more important. What’s it like to really, truly alter the course of human history?

DT: It’s truly humbling. But the economic enterprises I’ve built are nothing compared to what I’ll do as president!

TG: Yeah, I was talking to Vasco again.

VdG: Oh, I would not say that I’ve changed the course of anything, Senhorita. I am but one man on the endless search for knowledge.

DT: Well I don’t need to search for what I already have.

TG: Really? And since you know so much, how DO you get to India from Portugal by sea?

DT: I told you: you jump on Trump Air and cruise in style. But I guess if you’re going to be real insistent about this whole “sea route” thing, then we can hop on my yacht. Captain Pete will get us there.

VdG: You must stick close to the coast of Africa the whole way, of course.

DT: AFRICA?! I’m not a big fan of that country-bunch of whiny freeloaders if you ask me.

TG: Well that was wrong and offensive on a few levels. Perhaps it’s time that we end the interview, so Vasco and I can go check out that new wine bar they just opened up down the street from my completely-empty-because-my-roommate’s-gone-for-the-weekend apartment.

VdG: I would love to, bela.

TG: Well on that note, I’ll leave it to readers who they’d rather be: the proudly ignorant and insatiably curious and incurably handsome Vasco da Gama, or the “knowledgeable” Donald Trump. Come on Vasco, let’s blow this popsicle stand.