January 22nd, 2015
“You’ll Die If You’re Not Enthusiastic”: Inside the Woes of the Exclamation Point 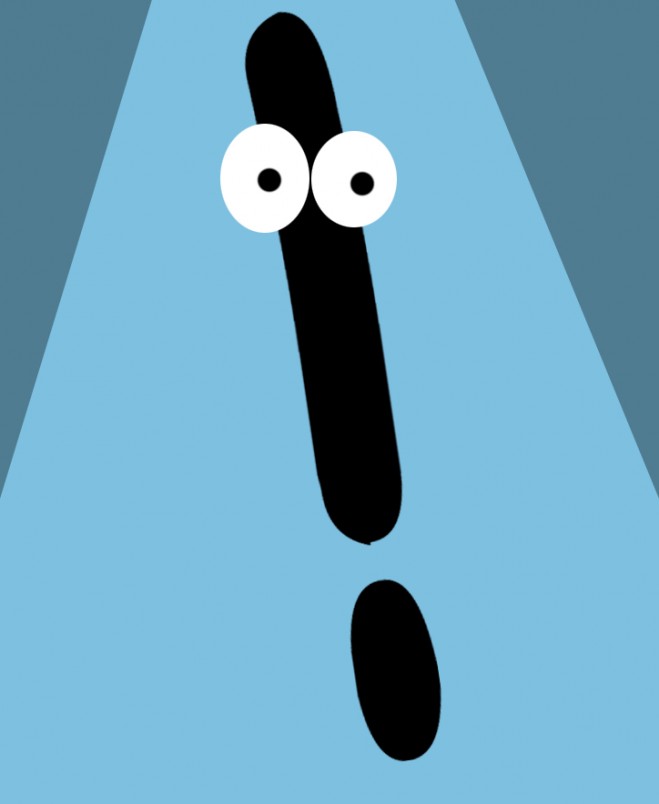 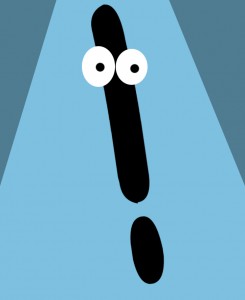 We live in very exclamatory times. Thanks to the internet, we have a ton of outlets for our enthusiasm, most commonly expressed by the use (and overuse) of the exclamation point. But have you ever paused to consider how the Exclamation Point feels about this sudden turn in the spotlight? To find out The Gabbler sat down with him and had quite the illuminating conversation.

The Gabbler: Hi there Exclamation Point!!! Thank you so much for meeting with me today!!!

TG: Well that was…calm. Are you feeling all right?

EP: But of course. Am I acting strangely?

TG: You could be a little more enthusiastic! Like, this is the first time I’ve EVER met a punctuation mark! And you’re going to get your name splashed in lights, right there on the Gabbler home page! Isn’t that MAJOR?!

EP: Well, I suppose. I’m more on the shy side, as far as punctuation is concerned. If you wanted someone who’s used to the spotlight, why not interview the period? He’s everywhere. Or perhaps the comma? He’s a big fan of controversy, as anyone who has ever engaged in the Oxford comma debate could tell you.

TG: That’s SOOO interesting!!! You know so much punctuation gossip! But why so shy?! You’re it, baby! You’re the center of all heightened human emotion!

EP: Well that’s just it, isn’t it? Most emotion isn’t heightened. So I’m really not used to being used much. It’s only lately, with the advent of the internet, that I’ve been everywhere it seems. In your emails, your G-chats, your Twitter feed. 140 characters and you use me four times? Now doesn’t that seem like quite the waste to you? I’m just not used to all the attention, I suppose.

TG: Okay, Exclamation Point. Let’s start at the beginning, then. Ease you into it. Where did you come from?  Where does any punctuation come from? Where do WE even come from?! What does this all mean?!

EP: I think I may only be able to answer one of those questions sufficiently. For the rest I’d refer you to any major world religion or the philosophy class of your choosing. As for my origins, it’s said that I come from the Latin io, which was added to sentences to denote great joy. Eventually they moved the “i” over the “o” and I was born. For the longest time, I was used sparingly to denote a sense of wonderment. I wasn’t even added to keyboards until the 1970s.

TG: But now you’re everywhere! It must be so great to be so famous!

EP: But that’s the point, isn’t it? I used to MEAN something. When you saw me, you knew, just knew, that something big had just happened. That someone had said or done something worth commenting on. Real enthusiasm, really human joy or anger or sorrow: your sweetheart is back from the war, or has left you for another man, or has died unexpectedly in a car crash. It was REAL, substantial human emotion fit for the occasion. Now I accompany every greeting, every email sign off, every single Facebook status. As if you’ll all die if you’re not enthusiastic every second of every day.

TG: But enthusiasm is SO important, you know? Like, how will people know that I’m a nice, sincere person, if I don’t pepper all correspondence with exclamation points? Then I’ll just seem rude!

EP: Isn’t that the point? That it’s NOT sincere to throw an explanation point on the end of a passive aggressive sentence to Julie in Marketing just to make it seem like you’re telling her nicely to stop taking coffee breaks and do her goddamn job?

TG: YOU have a Julie in Marketing, too? Ours is the worst!

EP: I can so unequivocally that your Julie is not the worst. Because in five minutes I’m sure the burrito you bought for lunch will be the worst and then the graphic designer you meet for drinks tonight will be the worst, and don’t you understand? Most of life is not lived in the extremes! Nothing is the worst! Nothing is the best! There is no use for me! Not all the time!

TG: I see I finally convinced you that exclamation points are useful.

TG: But I have two very serious questions: 1. How can a burrito ever be the worst? Have you even had a burrito? They’re the best! 2. What intel do you have on the graphic designer? Did Julie tell you something? She’s SO trying to cockblock me!

EP: I don’t even know how to begin to respond to that pile of nonsense.

TG: Getting a little touchy are we? Fine, let’s go back to the topic at hand. So why do you think that I’m overusing exclamation points when things like comics and Upton Sinclair exist? Upton Sinclair used you so hard, I’m surprised there’s anything left for all my email sign offs!

EP: Don’t even get me started with Upton. That man never saw something he didn’t think worth exclaiming upon. As for comics, I honestly see the need. They’re pulpy, surreal, they take place in a world where everything is over the top and men wearing leotards and tights save the day.

TG: So you don’t think that my Facebook page is an equally amazing, surreal world filled with tights and leotards? Obviously you haven’t looked closely enough at my photo albums!

EP: I’m saying that your email, your Facebook, your G-chats even take place within the realm of the real, where every hello doesn’t need to be followed by five exclamation points just to show that you are so very enthusiastic, upbeat, and nice.

TG: But how will people know that I’m nice if I don’t use exclamation points when I send them messages? Then I’ll just seem like a bitch!

EP: You could start by treating them nicely when you interact with them in real life. Take your friends out for drinks, invite Julie from marketing out to lunch, listen to problems with a kind heart and an open mind, help your best friend’s sister find an apartment, then help her move into it. Be a good person, then your punctuation won’t matter.

TG: Eh, that seems kind of time-consuming and expensive. I’m probably just better off shooting them an email filled with these: !!!!!!

EP: This is only going to get worse, isn’t it?

TG: Much. But that’s all the time we have. Thank you so much for taking the time to speak with me!!! I hope you have a lovely day!!!