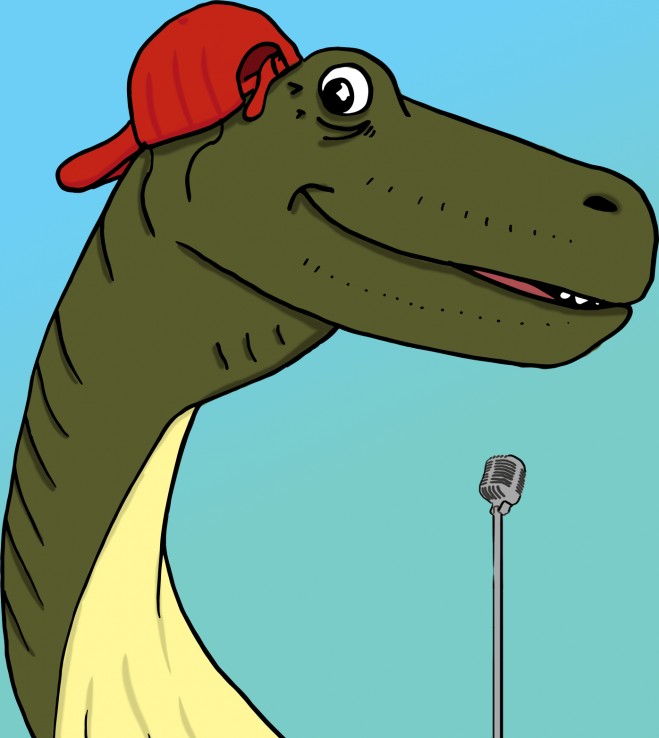 Earlier this month, a study revealed that the Brontosaurus, long believed to be the same dinosaur as the Apatosaurus, was in fact its own genus. To celebrate getting back everyone’s favorite Kimmeridgian age creature, The Gabbler tracked one down for an interview. After almost a month of wandering his old stomping grounds in Wyoming and Utah, we were shocked to find one hanging out in the American Museum of Natural History in Manhattan.

The Gabbler: Welcome, Brontosaurus! It’s so great to meet you!

Brontosaurus: Bow down to your overloard, Homo sapiens! The noble thunder lizard has come to reclaim his existence! And his throne!

TG: Woah, woah, woah, calm down. Let’s not be too hasty. It’s 2015 AD, you know. We don’t really have overlords anymore. This isn’t the Jurassic Period or Westoros or anything.

B: Hahaha, sweetheart, don’t get your panties in a bunch. I was just kidding. That noble thunder lizard is a joke. You guys are terrible at naming things, you do know that, right?

TG: Do I ever! I mean, Homo sapiens means “wise man.” And while I DO Know some pretty good fart jokes, I’m always worried that they’re not quite wise ENOUGH. You know?

B: Absolutely. Speaking of farts, remember that time you guys thought we farted our way to extinction? That was classic.

TG: Oh yeah! That was HILARIOUS. But we’re here to talk about your really exciting news: you’re your own real species and not just a baby Apatosaurus, like we’ve believed since 1903. Congrats on getting your existence back!

B: Thanks, babe. You know, I’ll be honest: it’s been a really tough road. When I was discovered in 1879 I thought: this was it! My big break. And then that TOTAL DOUCHEFACE Elmer Riggs came around and decided I wasn’t even real! And for the next 100 years, it was like I didn’t exist. Except, of course, you know, in science textbooks taught in school, in popular movies and TV shows, on a special commemorative stamp in 1989, and in the imaginations of children everywhere. But meanwhile there were literally tens of paleontologists doubting my existence. It was infuriating!

TG: That sounds awful. Being told you were an Apatosaurus must have been a real Matrix moment for you.

TG: You know, that moment when you’re watching The Matrix for the first time and you think “ohmygod, what if none of this is real? What if I’M in the matrix? How long will I have to wait until a hunky, ethnically ambiguous man named Neo comes to save humanity from the machines after making out with me a whole bunch???” I chopped off all my hair and wore a lot of full-body leather suits waiting for my Neo. But I’m going to let you in on a little secret: Neo’s not coming. Because the matrix isn’t real.

B: Don’t sweat it, babe, with legs as sexy as yours, you’ll find somebody one day. They’re so short and stubby and round, any dude would be lucky to have you.

TG: Ummmm, thanks, I think? So what are you going to do now that the world has discovered you’re real again?

B: Oh, I don’t know. Maybe go viral, monopolize headlines around the globe, hang out with Fred Flinstone, and star in Land Before Time 75: Brontosaurus Is Back. You know, just a casual day in being actually real.

TG: Yeah, and then maybe check out an advanced screening of Jurassic Park! That Chris Pratt sure is dreamy now that he’s finally dropped all that first year of marriage weight.

TG: Okay. But, like who was even in the original? Jeff Goldblum? Chris Pratt could crush him with one luscious bicep!

B: Babe, if you ever, and I mean EVER, shit talk Jeff Goldblum in front of me again, we’re going to have a problem. Capiche?

TG: Okay, okay, I got it. And since when did brontosauruses learn Italian? Aren’t you from Wyoming?

B: I’m from Utah, actually, but I have some family from Wyoming. Good guys.

B: Listen, I get it, okay? Scientists have a lot of trouble defining species in the past. It’s pretty straightforward with animals that exist: if they can reproduce and create viable off-spring then bam! you’re the same species. But when you’re dealing with something that’s extinct, all you have are bones (and not the fun, reproducing kind, if you know what I mean!). So, yeah, there’s going to be controversy and all of these semantics over what is a species really.

TG: So you don’t exist? You’re an Apatosaurus after all?!

B: Oh, I exist. I’m going to let you in on a little secret: I grew up right next to an Apatosaurus and she was one hot dish, if you know what I mean. Her legs were stout as fuck and her tail just went on for yards. And not to kiss and tell, but if we had been able to produce viable offspring, we would have, with all the “reproducing” we were, if you know what I mean.

TG: Well, that sounds pretty definitive to me. #science! How do all of your friends feel about your great news? Is T-Rex taking it well?

B: Babe, I don’t know T-Rex. He’s 65 million years old; I’m 155 million. Me hanging out with T-Rex would make as much sense as you going on Kik to talk about how fleek Becky G is.

TG: I don’t know what any of those words mean, but I think you just called me old?

B: Sorry. But to the kids on Kik, you and I are basically the same age.

TG: Ouch. So we’re playing hardball, are we? Well at least I’m not extinct!

B: Keep denying climate change and you will be soon enough, don’t worry.

TG: WOAH. I believe in climate change, okay? I GET it.

B: Yeah? And how’s your green living going?

TG: I think I’m doing pretty well, thank you very much. I mean, sure, I have an SUV, but I NEED it to get to work and stuff. And you know, I go to Ikea like at least once every two years, so it wouldn’t make sense to have a smaller car. Where would I put all of the vegetable shaped throw pillows and cheap bookcases that I buy? And sure, I keep my heat at 80 all winter but you get it, right? You’re cold-blooded!

B: Listen, babe, you do what you want. You’ll probably be fine. It’s more your grandchildren’s grandchildren that I’m worried about.

TG: Oh thank god. My care lease isn’t up for another year, so I’m definitely not giving that up any time soon. Well, I think that’s all our time. I’m sure you have plans with pterodactyl? Stegosaurus? Am I getting closer?

B: Yeah, Steggy and I are pretty close.

TG: See, I know stuff! Well, thanks for meeting with me! And congrats again on your re-instated existence!