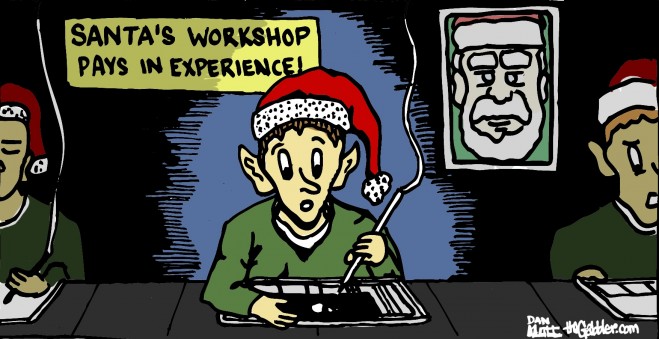 To many of us, Christmas elves are cheery little creatures with a great work ethic and an affinity for pointed shoes. That’s why when the The Gabbler received a copy of a manuscript for a new memoir, written by a young Christmas elf named Pinecone Candyflakes, we were stunned to hear of the long hours, unpaid work, and poor living conditions that these creatures who make our expensive toys, luxury clothing, and other gifts must endure every day. The following excerpt is from the forthcoming memoir, titled “The Elf Diaries.”

I’m beginning to think this isn’t an “unpaid internship.”  I’ve been here for six months. I work 18-hour days, and I’ve accidentally electrocuted myself six times while tweaking the iPad Air.

I thought it would be such an honor to be a real Santa’s Elf, but I’ll tell ya, my old job at Keebler is looking pretty good right now. In fact, I’m beginning to think that Mr. Santa Claus is nothing more than an obese, psychotic, megalomaniac with a manic obsession with Christmas.

Sure, there’s cocoa. Yeah, there are lots of freshly baked Christmas cookies lying around. But all the good stuff goes straight to Mr. Claus’s jiggling belly, and we get thrown the leftover scraps like pigs – if there is anything left by the time my break rolls around, that is.

Being one of Santa’s Elves means that the Clauses and the head elves can treat us like crap, just because they know the prestige of working here is enough to make us stay. They take us on as “apprentices” for an undefined period of time, and justify their lack of compensation with phrases like “you’re paid in experience,” “this builds your resume,” and “indentured servitude isn’t slavery.”

Every day, we wake up in our cots (we sleep about 20 elves to one room) at 4:30 a.m., to arrive in Santa’s Workshop by 5 a.m. We work straight through until noon, when we’re are allowed to break only if we need to relieve ourselves. Mr. Claus comes by periodically to check in and do impromptu quality checks. Then it’s back to work until 11 p.m., when we get our measly meal of lukewarm cocoa and burnt sugar cookies. We clean up until midnight, and walk home through the freezing wind and snow back to the dormitories. Then, we do it all over again.

And the Christmas music! I laugh bitterly when I hear that humans get sick of it after a few weeks – imagine hearing it every single, solitary day. It doesn’t matter if “Deck the Halls” is sung by a country musician, a rapper, or an opera singer – it’s still the same fucking song, over and over. In fact, I’ve heard that Mr. Claus uses this tool to torture elves he catches snoozing on the job. He’ll lock them up in the closet with only a locked iPad, and make them listen to “Rockin’ Around the Christmas Tree” on repeat for hours. Sometimes, I can still hear them screaming as they rock back and forth in agony.

But what choice do I have? The job market for elves is dwindling ever since the market crashed, and they realized that they can replace us with machines and even cheaper labor (dwarves). And of course, I have to compete with the elves who studied engineering and computer science in ways I’ve never had to before. I’ve always been told that my doll-making ability was excellent, and I’m not bad with train sets, either. But Final Fantasy XIV on PS4? I’m in over my head.

I just have to pray that this apprenticeship opens doors for me as a managing Christmas elf. Then maybe I’ll get health insurance and a paid vacation. I want to go somewhere, anywhere, that doesn’t have snow.