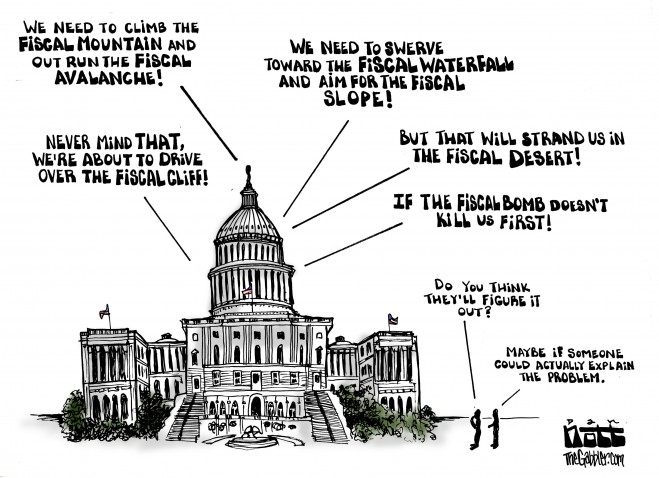 As the Bush tax breaks set to expire and the $1.2 trillion sequester of automatic across-the-board cuts hedge closer in December, Congressional leaders have decided to delay all budget negotiations until a bipartisan compromise can be reached on the most appropriate metaphor to use when referring to the potential fiscal disaster next year, otherwise known as the ‘fiscal cliff.’

“We have agreed to cooperate with the administration on how to raise revenue, but we simply will not budge on the term ‘fiscal cliff.’ A cliff is an eroded rock that juts out into plunging waters. It is hazardous due to human neglect, foreboding, and avoidable. Nothing can more suitably describe what our current fiscal predicament is,” Speaker of the House John Boehner (R-OH) said on behalf of the Republican party today.

Democrats in the House and Senate, however, maintain that “fiscal cliff” is too hyperbolic and promotes a negative atmosphere of fear-mongering in the eyes of the American public.

“A ‘fiscal cliff’ is inevitable and tragic,” Senate Majority Leader Harry Reid (D-NV) argued. “We need a metaphor that is less alarmist and more cautionary… like ‘fiscal slope,’ which perfectly rhymes with ‘fiscal hope!’ Now that’s what I call subtext. Or is that subliminal messaging?”

Congress members dissatisfied with both extremes have offered a swath of their own alternative fiscal metaphors. Sen. Mark Pryor (D-AR) has proposed “fiscal waterfall” to capture the flowing loss of entitlement programs, Sen. Lindsey Graham (R-SC) suggested “fiscal mountain” to convey the tax reform challenges that have to yet to be faced ahead, and Rep. Jan Schakowsky (D-IL) introduced “fiscal avalanche” to highlight the risk of accelerating cuts to Medicare, Medicaid, and Social Security before they have a  chance to grow.

“Fiscal Sahara Desert,” “Fiscal Icy Tundra,” and “Fiscal Amazonian Rain-forest”  were also submitted for consideration, but Associated Press confirmed this morning that several lawmakers found them too exotic and Congress has since ruled them out.

According to one anonymous staffer on the Hill,  532 potential fiscal metaphors are currently on the wait list for an up-or-down vote in the House and Senate.

One thought on “Mired By Competing Fiscal Disaster Metaphors, Lawmakers Unable to Proceed with Budget Negotiations”