In an interview with Joan Tarshis, a woman who has come forward to accuse Bill Cosby of rape 45 years ago, CNN reporter Den Lemon made a revolutionary statement: “You know, there are ways not to perform oral sex if you didn’t want to do it.” He went on to say that biting, or “using 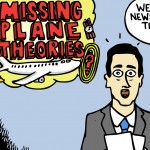 With few facts to report on regarding the missing Malaysian Airlines Flight 370, cable news outlets have been filling hour after hour of airtime with wild speculation.

Yesterday, the non-profit Americans Seeking Newsworthy Truth launched the free course “Bringing the Shock: How to Inspire Americans to Anger.” The course is aimed at “bringing honesty back to American journalism by exposing the rage-inducing truth.” “Too...

There was an elephant in the room directly following the announcement of the Supreme Court ruling in favor of the Affordable Care Act, but for reasons unknown to The Gabbler staff, no one on Capitol Hill wanted...