KLINGTON: The evolution of Hillary Clinton from an idealistic liberal who wanted to change the world into a hardened lifelong politician, characterized by Klingon-like attributes of ruthlessness, brutality, and aggression. “Hillary Clinton’s running for President! Finally!” “I’m sorry, I think you mean Klington. Sometimes I don’t even recognize her anymore.” 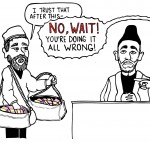 Americans advise Afghans on how to rid their society of corruption through campaign donations and lobbying – a trick that the U.S. has a lot of experience with in Afghanistan.