February 24th, 2015
Which Really is Mightier, the Pen or the Sword? 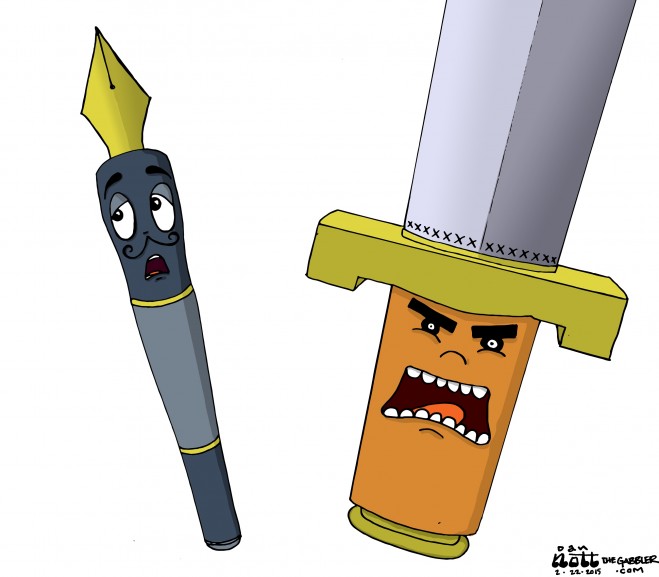 Well folks, this is it. An epic showdown going back hundreds of years – basically since one of our ancestors invented a sharp rock and the other drew pictures on a cave wall. In one corner, we’ve got The Pen. In the other, we have The Sword. Who is REALLY Mightier? It’s time to finally put this matter to rest.

The Gabbler: You know the rules you two – no hits above the face and no insults below the belt. Let’s have a good, clean fight, all right?

Pen: I will not deign to defend the many ways I’m both morally and intellectually superior to this blunt id of an object.

Sword: Hey, who you callin’ BLUNT? I sharpened myself YESTERDAY!

G: Pen, I SAID nothing below the belt, man.

P: Can this brute even speak full sentences?

S: No need. Words are for poems and the pansies who write them. I am violence. I am desperation. I am what you turn to when there’s nothing to do but act. AND NOW IS THE TIME TO ACT!

S: WHAT!? Do you see a even a SPECK of rust on this blade? I am in perfect physical condition, I’ll have you know. Did I mention that detail on my tip is hand-carved?

TG: Okay, OKAY. Let’s back up for a minute here. There’s a lot to discuss. Pen, why do you believe you are mightier? And please, be kind – you silver-tongued devil, you.

S: The only silver coming out of his tongue will be the ink I spill when I slice his plastic throat.

P: Wait- did he just craft a successful pun?

TG: I think he did!  Anyway, back to what you were saying – why do you believe you are mightier than The Sword?

P: I’ll tell you why.  I am the tool through which ideas are spread, and there is nothing more powerful on earth than an idea. Ideas can’t be killed; they are immortal, which is why I am the one you turn to when there’s nothing left. I am your apology, your words of love, your dying wish, and your only real shot at immortality. It’s why Shakespeare, Burton, Jefferson, and of course, Bulwer-Lytton (the actual author of the phrase we’re discussing today) all agree that the pen is mightier.

S: Are you finished?

P: I’m never finished, as I just clearly stated that I’m immortal. (The phrase “dumb as a rock” seems apt as ever, doesn’t it?)

S: Let’s cut through the bullshit for a minute here and think about what you just said. You used lots of fluffy language, sure, but at the end of the day, the four people who you say are believers that “the pen is mightier” are all…wait for it—WRITERS. That’s kind of a conflict of interest, huh? If you ask a real leader who has to make tough decisions every day, the answer will always be me.

TG: And why is that, Sword?

S: Because violence speaks louder than any scream. If the end justifies the means, the strongest means is violence. I’m not saying it’s not harsh. We’d all like to believe that words are stronger than punches, that if you politely tell a bully to “please, stop,” he’ll give you a big hug and be your best friend, and that our farts all smell like daisies. But this is the real world. Take a look around. ISIS, anyone? Sure, they scare the shit out of us with words too, but they really scare everyone because they chop the heads off of innocent people and post that shit on YouTube.

P: But what about the Charlie Hebdo shootings? That violence only served to show that the artists and writers of the world refused to be afraid of the threat of violence. There were thousands of cartoons posted in defiance, and the editors of the magazine posted a cartoon with a depiction of Mohammed crying in the following issue. Violence didn’t silence them. Because what they believe in is stronger than the fear of violence.

S: That was cool; I agree. But I guarantee more people will be afraid to express themselves in the future. Do you really want to be a pen in that newsroom?

S: I sense some hesitation. Careful before you leak some ink, you weenie. See, it’s easy to spout pretty words about honor when you’re protected – by a government that uses violence to preserve your freedom, nonetheless – but not so easy when lives are at risk.

P: You are forgetting that it is I who also inspires violence in the first place, you plastic butter knife! Machiavelli wrote The Prince, didn’t he? Fundamentalists commit violence because of their belief in the written word, and even the Nazis had Mein Kempf!

S: Yeah well, words didn’t kill Osama Bin Laden, just like those cartoons aren’t going dismantle Al Qaeda or ISIS. And most dictators give zero shits about murdering those who write against them, either. And P.S., this shaft is solid steal, baby. I know you were wondering.

TG: Guys, I’ll be honest. I don’t think either of you is the mightiest.

S: Say that again. It might be tough if I cut your tongue clean out of your mouth.

P: And then I’ll write a horribly embarrassing tell-all about you.

TG: Nice. Really classy, both of you. I’m just saying: I kind of think neither of you are mighty. It’s all about who is holding you, honestly. If that person is mighty and brave, so are you. If they are evil and weak, so are you. If not for them, you both kind of… don’t matter.

P: Well. I feel like I just read Nietzsche again.

S: I feel like I just lost a pound in muscle weight. Do I look thinner to you?

TG: Well, maybe not. I know! Let’s settle this in a fair, intelligent, and pragmatic fashion! How about we Rock, Paper, Scissors for the title of Mightiest?

P: I suppose that will have to suffice. It’s a given that paper beats rock, right?