High-baby (hīˈbābē): A young child who perpetually appears to be sedated or ‘zoned out’; the tendency to be languid; lackadaisical. Willie has been staring at that box of Triscuits for 45 straight minutes. It’s a little weird, but I’m kind of relieved he’s a high-baby and not a cry-baby. Derived:  Rapper Wiz Kalifa and wife Amber Rose, who

Valentine’s Day Hustle (vælənˌtaɪns deɪ hʌs əl): The attempts made by a single woman in the weeks leading up to Valentine’s Day to find a date. Seriously, just pick any man in the bar to hit on,...

Pope-Off (poʊp ɒf): Erroneously citing “advanced age” as a cause for withdrawing from an activity, especially when the activity has no bearing on age. “I’d love to sit by the pool with you Dan, but you know how my thirty-year...

Morning Burps (mɔr nɪŋ bɜrps): A condition of extreme belching during the morning hours, normally associated with over consumption of Pepsi’s new Mountain Dew flavored breakfast soda, Kickstart. Man, I’ve got to lay off the Kickstart. I’ve got morning...

Danica (däniku): A rare and excellent woman driver. Did you see that Chinese grandma parallel park across the street with that poodle on her lap while yelling into her cellphone? TOTAL Danica. Origin: Famous auto race car driver, Danica Patrick. 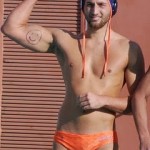 Just messing around this time.